We don’t eat turkey in my house.  We do a ham each year at Thanksgiving so Karly and myself decided rather than take part of the stuff off we’d do our own pork off.  BUT I didn’t want to make up a ham so close to Thanksgiving as my husband and I would just be finishing the first ham when Thanksgiving finally rolled around.  So I went scrounging through my porky recipes to try and figure something else out that could be served at Thanksgiving or at least feels like a “fall” dish.  I think I succeeded.  Inspired by my husband’s like of the stuffed pork chops from Trader Joe’s and my own like of caramelized onions and sauces, I created this dish.  You know it’s a winner when my neighbor who is a vegetarian stops by and says dinner smells good and reminds her of fall.  Then I informed her it’s a pork dish and she responds, “Might be worth trying it still.”  Yup, winner winner! 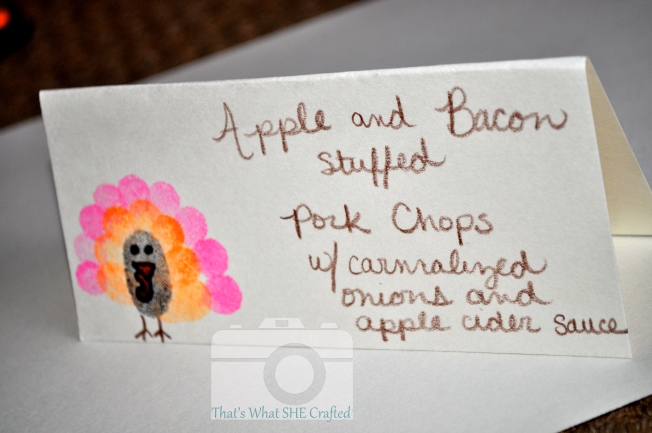 I started with cutting up my apples and onion.  Diced onions went straight into the hot pan while the diced apples waited on the cutting board, and the slices of apples and onions waited their turns in bowls. 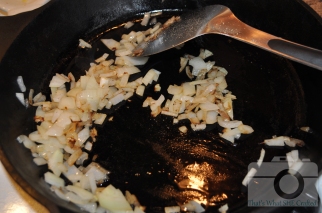 We are bacon snobs here in my house.  This bacon is home cured and smoked.  Don’t have time for that?  Thick cut bacon from the store works just fine.  4 slices please!  I like using my handy cast iron weight to keep things flat. 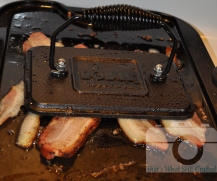 Onions nice and translucent and soft and in go the apples.

After the apples start to soften remove from heat and move mixture to a bowl.  Add a slightly beaten egg and chicken stock or broth.  Mix.  I forgot to leave out bread and forgot to toast it a little before I started so I baked my bread for a few minutes.  Oops.  Crush and tear up the bread.  Chop the crispy bacon.  Fold into the mixture making sure the bread soaks up all that liquid. 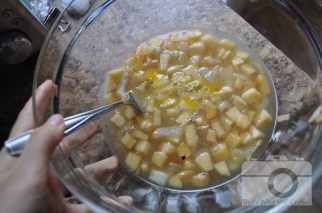 I don’t know about you but I can never find chops to the thickness I want without having to track someone down at the meat counter.  I bought a pork loin and cut my own slices (and froze my extra slices for another day).  Score the fat to prevent curling while cooking or trim it off.  Then create the pocket. 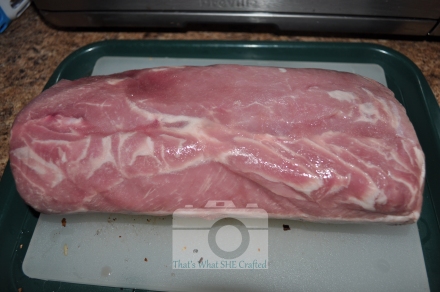 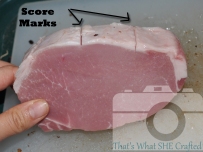 Stuff!  There’s lots of stuffing left so I took the extra and put it in an 8×8 pan.  Baked at 350 for 30 minutes and added the meat drippings when the chops were done.

Back in the same pan I used for the onions and apples.  If I didn’t mind waiting on the bacon I could have done this dish all in one skillet.  Alas I didn’t want to wait and cooked a few things at the same time but 90% of the stovetop work was done in my trusty cast iron skillet!  Medium high heat, a tablespoon of olive oil, and NO TOUCHING for 3 minutes= browned perfection.  Repeat for my second batch.  Apparently I forgot to take pictures of the chops in the pan, whoops! Heading to the oven!  Don’t forget to cover!  Now to make the toppings! 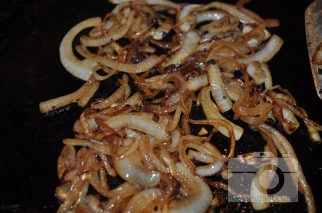 And time to pull out the chops! 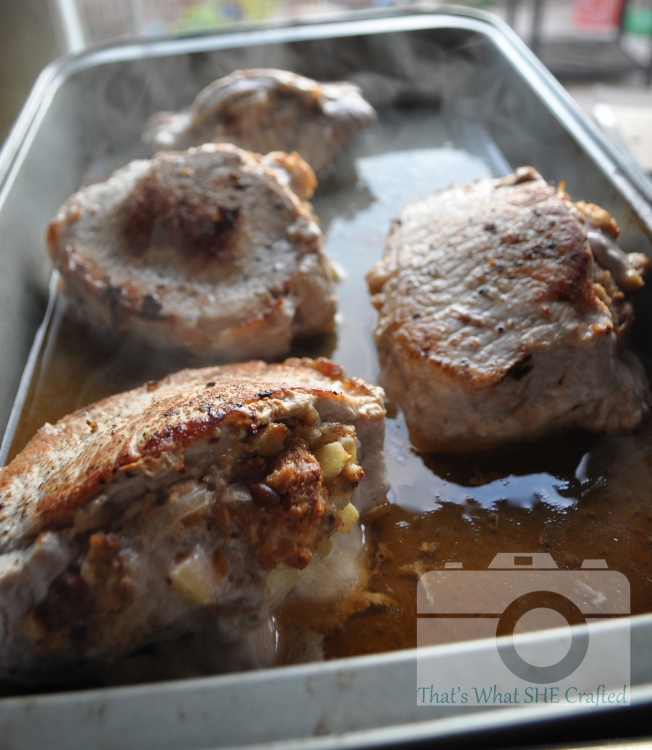 Apple slices turn!  Cook until they just start to soften.  Add the 2 tablespoons of maple syrup. Then add the apple juice and spices.  You could substitute real apple cider here too if you wanted.  Simmer. 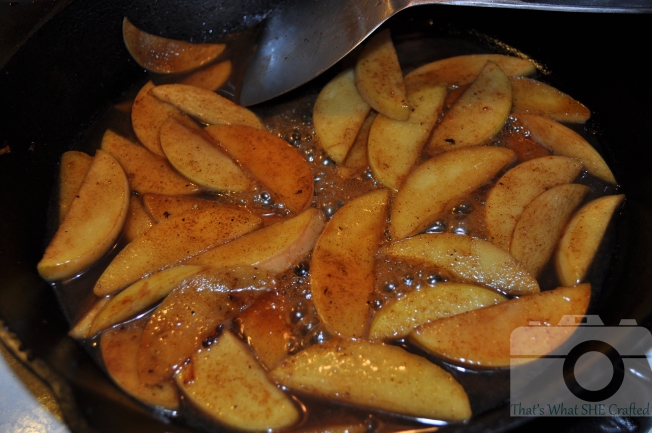 Pork Chops!  Assemble!  You can just go with a plain stuffed chop.  Or you can dress it up topping with the lots of onions, apples, and spoon on the sauce.  If you cooked up the extra stuffing you can serve it on top of the stuffing too so it catches all those yummy juices.  Side salad or some roasted veggies and you’ve got a nummy meal! 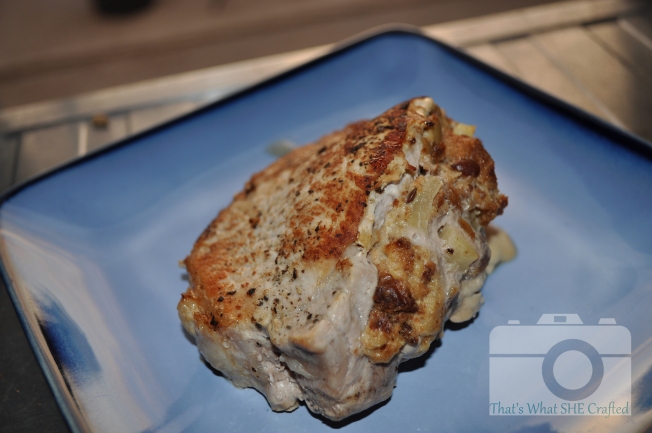 ** Leave the slices of bread out on the counter for 24 hours or if you’ve forgotten lightly toast the bread and leave it out for an hour or so.  You want dried out crusty bread so it absorbs the moisture.

Directions:
Stuffing
Brown the bacon until crisp.
While the bacon is browning, heat the oil to medium heat and then add the onions.  Cook until soften and translucent then add the apples.  Cook until softened.
Move the onions and apples to a medium work bowl and add the egg and chicken stock.  Mix.
Crush/rip the bread slices to large crumbs and mix into the onion apple mixture.
Roughly chop the bacon and add to the mixture.

Pork Chops
Heat oven to 350
Create a pocket in the pork chop by cutting through the middle leaving ¼ to ½ inch of space along the edges.  Also if you are not trimming off the fat make sure to score every inch to inch and a half along the fat end to prevent your pork chop from curling.  Season pork chops with salt and pepper.
Stuff the pork chop using the stuffing you made earlier.  You can use toothpicks to help hold everything together if needed.  You will have leftover stuffing.  If you desire you can grab a small baking dish and bake the leftover stuffing at 350 for 30 minutes.
Using a skillet heated to medium high heat, depending on the size of your skillet heat 1 TBS oil for cooking two chops or 2 TBS for all four chops.  Brown on each side for 3 minutes. (Repeat for the second two if you are having to do it in batches)
Move chops to 13 x 9 dish and cover.  Bake for 20 minutes or until pork registers an internal temperature of 145.
Uncover and let it rest for several minutes before serving.

Toppings
Heat 1 TBS olive oil in pan at medium heat.  Add onion slices.  Stirring frequently allowing the slices to brown and caramelize.  If onions are sticking to the pan you can use a little of the apple juice to help deglaze the pan.  This will take 15-20 minutes.
Remove onions from the pan.
Adjust heat to medium low.  Add apple slices.  Cook until apple just start to soften, about 4 minutes.
Add maple syrup and a touch of salt (pepper too if you want).
Add apple juice, nutmeg, clove, cinnamon and simmer for 3 minutes.
Serve the stuffed pork chop topped with lots of caramelized onions, apples, and cider sauce.
This main dish would pair well with almost any roasted vegetable!

Friday is our normal day to spotlight another blog or person.  However, we also know  things happen.  What happened this Friday?  Well our featured blogger has been ill for the last week and was unable to be spotlighted today.  So instead we offer this recipe for some nutritious soup that’s bound to make anyone feel at least a little better.

One of my favourite fall/winter meals is Chicken stew! I will use leftover turkey or even just cut up the chicken breast into small pieces for this meal. It is fairly quick and so hearty!  As per How I like things here is THE recipe, my own, made up after many trials and errors to get it how I like it!

First I want you to peel all those squash and spuds, cube and get into seperate pot. The potato cooks slowest so get those in water first and then the butternut squash and then the sweet potato. Let them boil until done.

Once you have that done, move onto the chicken and other veg.

Put your chicken (if using raw boob) in the pan and fry it up. When close to done, add the onions, celery, and the basil.  When the celery and onion are close to done add the mushrooms.

When your veg is cooked, add 2Tbsp of brown sugar and a teaspoon of oil and let it cook for a few minutes, stirring often.

Then add in your chicken oxo into the pot and heat to just below a boil.

Thicken up that sauce and once it is thickened, gravy thick ish NOT pudding thick.  Add in the potato and squash. 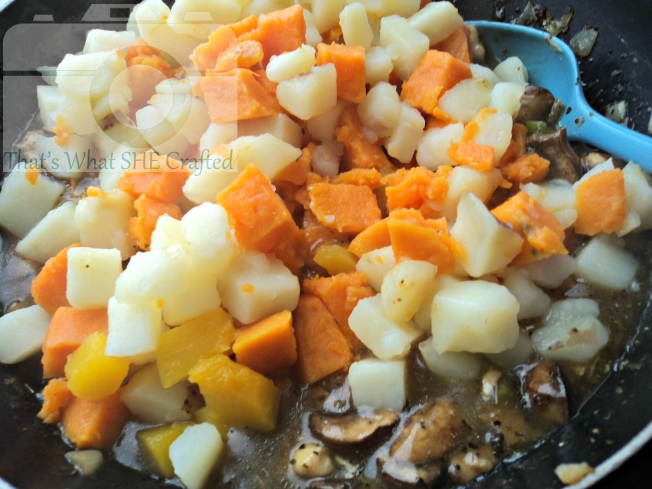 Give it a gentle stir until mixed and everything is nicely coated in sauce.

And there you have it, a pretty and delicious chicken stew! Perfect for using up that leftover thanksgiving turkey you have! Enjoy! And if you make this please feel free to comment and let me know how you feel about my stew recipe 🙂

What is your go-to fall meal?

Follow That's What She Crafted on WordPress.com
Join 2 other subscribers

Fresh off the Presses